This is Radical part III.  For more check the table of contents here.. 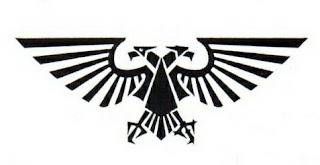 My power armor had not been completely repaired by the time we were on our way, and I spent most of the trip shifting uncomfortably in the suit.  The dents from the heavy bolter rounds that had hit me couldn’t be removed without a more extensive repair facility, so the warped ceramite dug into my ribs with every bump our transport hit.  To go along with this, the knee joints that had been cut through were fixed in a rush job, leaving the articulating musculature inside the armor’s legs twitchy and unreliable.  I walked with a limp, sometimes having to drag my left leg along behind me.  Still, it was better to have malfunctioning armor than none at all, and though I would have gone into battle nude if I’d had to, the Adepta Sororitas are as much a symbol as a fighting force, and the power armor I wore served more purpose than simply bullet stopper and strength enhancer.
The Imperial Guard began shelling the enemy’s flank while we were on route, mostly to keep their heads down as we approached.  From there Dominion squads would serve as spotters for the guard’s guns, lining up more accurate shots on the Mechanicus Facility’s defenses.  Celestians were to get to the manufacotrium themselves and set the melta charges that would bring down the servitor production facility while the rest of the Commandery set up a defensive perimeter inside the facility to cover the Celestians.  From there it was a simple evacuation plan of loading back up into the transports and heading home.  Some of the Harbingers’ thunderhawks were to provide air cover and emergency extraction if necessary.  This mission was expected to have very high casualties, but we were Sisters of Battle.  If anyone was prepared for martyrdom, it was us.