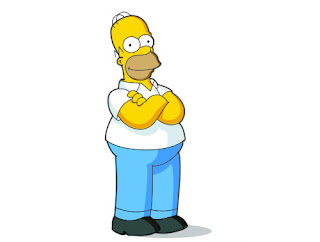 While this is, nominally, a 40K blog, since I have been getting the most attention for my writing rather than my gaming, I thought this might be a good chance to go ahead and throw some good old fashioned advice column in here.

Now, as a tabletop gamer I know that creating a character is one of the most vital parts of the entire endeavor, and one that many people struggle with, whether they know it or not.  This same struggle comes up when creating characters for fictional universes, whether they be in stories or games.  Many gamers enjoy creating characters for their 40K armies, naming their Space Marine captains or Farseers or Crisis Commanders.  This is colloquially known as fluff.  But what makes good fluff characters and bad fluff characters?  The same thing that makes good literary characters and bad literary characters.

Up above you see one of my favorite characters of all time, one Homer J Simpson.  Homer is, to me, a wonderful example of a character.  He exhibits all of the characteristics required to create an engaging and memorable character.  He is multifaceted,relatable, goal oriented and, above all, terrifically human.  Originally, The Simpsons focused on the antics of Bart, but as the series matured the focus moved on towards Homer as he was less one dimensional than his mischievous son and provided more options for storylines.  His mixture of below average intelligence, determination to solve problems and general lack of foresight came together to create a character that is both alien and all too familiar.  We, as humans, do not want to hear stories about the everyday lives of ourselves, we want to hear stories about the adventures of our exceptional neighbors.

Not every character has to be Homer Simpson.  In fact, one of the reasons that Homer is so memorable is the fact that he has cast a unique mold for himself in our psyches, one which other shows in the same genre have tried to emulate with varying degrees of success.  The key to a good character though is not in the external challenges or the superficial characteristics, but in the viewpoint of the character itself.  Homer is constantly flabbergasted, bewildered and in over his head; his stories reflect this by making everything seem larger and more difficult than it is.  Peter Griffin of Family Guy, however, is possessed more of a supreme and mislaid self confidence mixed with dramatic hyperactivity.  This results in stories about relatively similar character archetypes, the dim witted husband and father, having entirely different styles and themes thanks entirely to the character's viewpoint.

Let's look at another example:

Everyone knows the man on the right, Superman, but his not quite as popular counterpart there is Captain Marvel. On the outside they are remarkably alike.  Tall, muscular men with shining black hair, they are both impossibly strong, impossibly tough and impossibly fast.  They can fly, they fight badguys, they're both in the same superhero organization, how are they different?  While one could argue powers forever, the differences in the characters themselves is a matter of viewpoint.  Superman is an alien, forever alone on the planet, the Last Son of Krypton, protecting his adopted home because he feels that it is right and just.  He is a fully grown man with staunch convictions and experience who knows how to use his strength to achieve his goals.  Captain Marvel, on the other hand, is a young boy with the power to become "Superman".  He has not had time to grow into his convictions, but instead simply apes what he believes to be honest and true.  He moves through life with the innocence of a child and the strength of a man.  He does what is right not because of decisions he has made, but because of a childlike naivete that right is right and wrong is wrong.  While Superman's actions are guided by reason, Captain Marvel's are guided by emotion.  This results in characters with vastly different viewpoints and thus vastly different stories.

To bring this back around into 40K I'd like to contrast two more characters, one bad, one good.


Why is one good and one bad?  Because one is a person with a viewpoint and the other one is testosterone with weapons.
Posted by Commissar Carrie at 1:41 AM