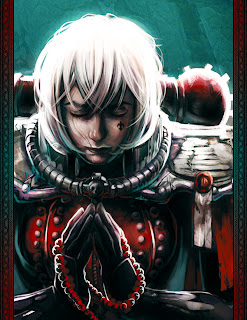 This is the end, my only friends, the end...

Or something to that effect, at least.  After the release of the White Dwarf codex of Sisters of Battle I completely and utterly lost all interest in Warhammer 40k as a gaming platform.  I know that sounds kind of whiny, but I honestly didn't mean for it to happen, it just did.

I played in the 3++ Ladder before the codex came out and managed an amazing 0 Wins, 3 Ties and 1 Loss.  I never really claimed to be a tournament level player, and this event really proved it for me.  Halfway through the ladder tournament players were allowed to restructure their armies and, since a new codex had come out for me, I had to use that one.  The end result of this was me staring at the codex for a while, then just decided not to continue competing.  I felt like I'd been abandoned, and I really didn't feel like trying to fight tooth and nail for draws anymore, especially with an update that would require me to completely relearn army tactics.

I liked the idea of switching over to Warmachine, as the aesthetics for Khador really made me giggle with glee, but a lack of local players and a lack of time and money to invest has put me off of it.  I would love to be reinvigorated with Warhammer 40k, but I just can't think of anything I want out of the war game anymore.  I still enjoy the setting, and the RPGs, but the actual game itself leaves me feeling apathetic.

So, I present here a chance for anyone still reading this to help me find that lost magic again!  Comments are open to advice!